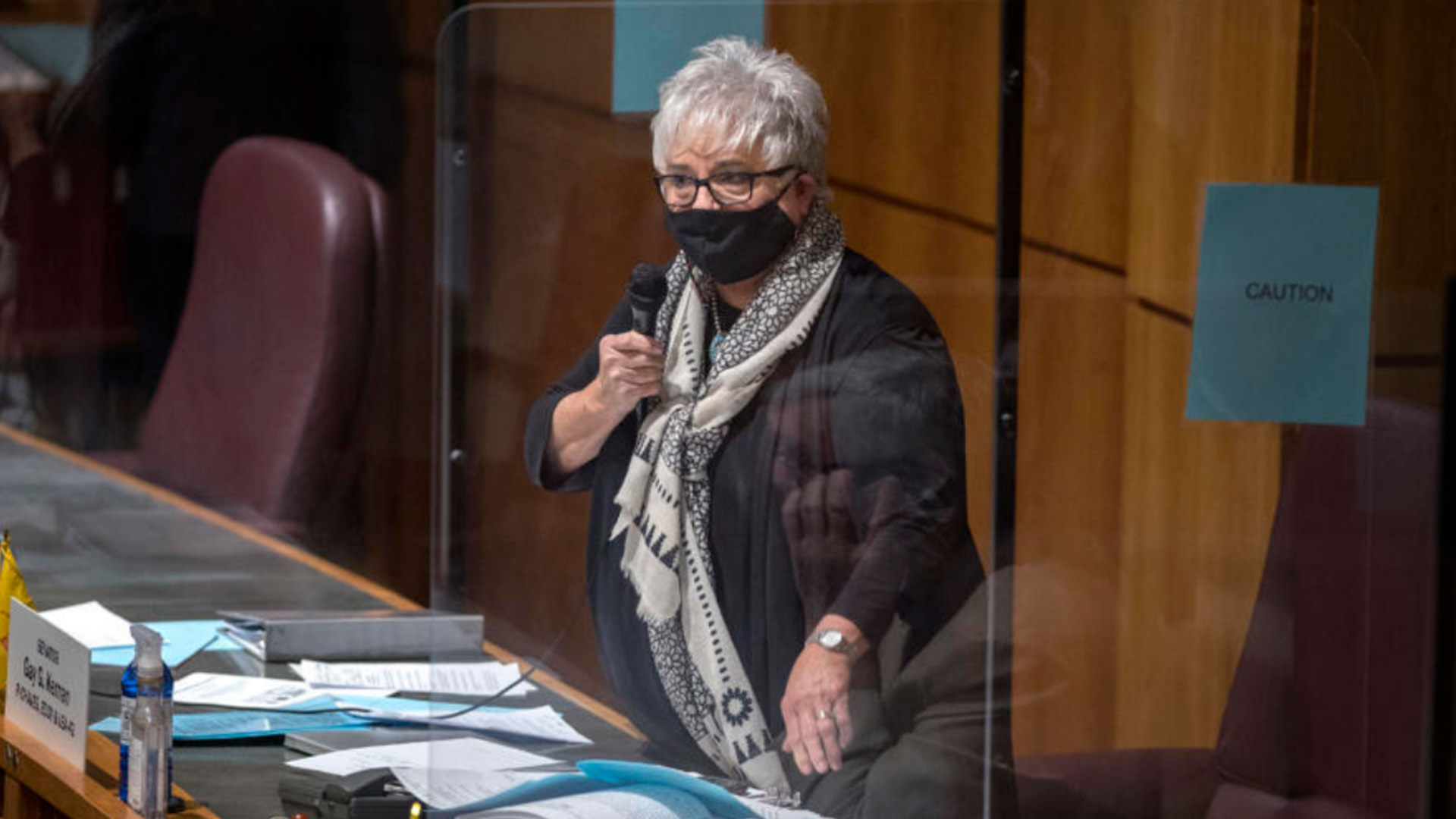 It’s a debate that’s brought to the Roundhouse powerful testimony by physicians, hospital executives, trial lawyers and New Mexicans who have lost loved ones to medical mistakes.

Each of the competing measures proposes to strengthen New Mexico’s patient compensation fund – an account that covers medical malpractice claims that exceed a certain amount.

But the two proposals working their way through the Legislature take much different approaches to the problem.

One measure, House Bill 75, sponsored by Democratic Rep. Daymon Ely of Corrales, is backed by family members who say hospital wrongdoing harmed or even killed their loved ones.

The proposal squeaked out of the House last month on a 35-34 vote, with nine Democrats and one independent joining all Republicans in opposition.

The other measure, Senate Bill 239, jointly sponsored by a mix of Democrats and Republicans, is backed by the New Mexico Medical Society, the New Mexico Hospital Association, three groups of nurses and business organizations. They say their legislation would ensure that the state – already facing a doctor shortage – can recruit and retain physicians who face increasing costs for malpractice insurance.

The bill would make more providers eligible for the patent compensation fund as a way to spread out the risk, raise the cap on medical malpractice damages from $600,000 to $750,000, and revise how hospitals may participate in the fund, but not exclude them.

The proposal has advanced through one of the two Senate committees necessary to reach the Senate floor. It would also have to go to the House.

For now, both measures are expected to collide in the Senate Judiciary Committee, which would likely pick one proposal or the other, or perhaps revise them entirely.

Sen. Gerald Ortiz y Pino, D-Albuquerque, told his colleagues this month that he had received hundreds of individually written letters about the bills – more than any other piece of legislation this session.

“It’s clearly an issue that demands input from lots of different players,” he said in a recent hearing.

Ezra and Sherry Spitzer of Albuquerque lost one of their twins shortly after birth in 2014.

Effie, their daughter, was asphyxiated, resuscitated and later died. Her sister, Maisie, is now 6.

After their birth, the hospital gave the family a $250,000 bill, Ezra Spitzer said, and the family eventually sued, resulting in a confidential settlement.

“We need to be serious about $600,000 – if any of us believe that would be justice for your own child, for your own family member, and if you’d be able to go to sleep at night and believe that penalty made anybody change,” Ezra Spitzer said in an interview.

He is among those who have testified in support of House Bill 75. It won House approval two weeks ago by the slimmest of margins – just one vote.

Ely, the sponsor, and other supporters of the legislation say hospitals never should have been allowed into the fund or to benefit from the $600,000 cap on compensatory damages.

Instead, they argue, the fund and the damages cap should be reserved for independent physicians who wouldn’t otherwise be able to obtain insurance.

Under the current system, an individual provider must purchase a certain type of insurance that covers up to $200,000 and three “occurrences.” The patient compensation fund then covers claims between $200,000 and $600,000.

In an interview, Barbara McAneny, an independent physician and former president of the American Medical Association, said hospitals haven’t always been a part of the fund. But now that they are, she said, they are damaging the fund’s financial condition, which in turn threatens the financial viability of doctors who operate their own practices.

“The cap is what has kept our premiums in New Mexico to a manageable level,” McAneny said. “We have a shortage of doctors here.”

Ely, a lawyer, put it this way to his colleagues: “The doctors have to do this. The hospitals are doing this just because they’re getting a better deal.”

But opponents of the bill say removing hospitals from the fund would have the opposite effect of what supporters are aiming for. It would worsen, not improve, the financial standing of the patient compensation fund and, ultimately, make New Mexico less attractive for health care providers, they say.

One practical problem, opponents say, is that the fund would still be obligated to pay out hospital claims that stem from “occurrences” that happened when they were covered by the fund. In other words, the fund might have to pay a claim in 2022 resulting from something that happened in 2019, but hospitals would no longer be contributing to the fund at that point, helping share in the cost.

Troy Clark, president and CEO of the New Mexico Hospital Association, said that the House legislation sounds like a simple fix but that it doesn’t take into account the “peripheral damage” to other parts of the medical malpractice landscape.

“If you remove hospitals from the (Medical Malpractice) Act,” Clark said, “the physicians remaining in the act are left holding the bag on what is currently projected as a deficit.”

Rising surcharges, he said, might force them out of the state.

The Ely proposal, in any case, is awaiting a hearing in the Senate Tax, Business and Transportation Committee. It would go to the Senate Judiciary Committee after that.

It advanced through the Senate Health and Public Affairs Committee last month on a 5-3 vote without a recommendation. It’s awaiting a hearing in the Senate Judiciary Committee.

Rather than kick hospitals out of the fund, the plan would give them two options, supporters say. Hospitals could either pick a policy limited to just three occurrences requiring a payout, or they could choose an unlimited policy.

And the bill says that before punitive damages can be pursued in court, a judge would have to make a finding of “a reckless and wanton indifference to the value of human life.”

The bill would establish an advisory board of lawyers, medical doctors and the insurance superintendent to watch out for the finances of the patient compensation fund and tackle broader medical malpractice issues.

“This is a well-thought-out bill,” Sen. Martin Hickey, D-Albuquerque, told his colleagues in a recent hearing. “It updates the medical malpractice act in a very appropriate way.”

Hickey is a retired physician and former CEO of Lovelace Health Systems.

He is one of five co-sponsors of the measure. The others are Democratic Sen. Liz Stefanics of Cerrillos and Republican Sens. Gay Kernan of Hobbs, Senate Minority Leader Greg Baca of Belen and Stuart Ingle of Portales.

The bill is also backed by hospital, medical and nurses groups.

“This is a comprehensive solution,” Nancy Wright, a pediatrician in Las Vegas and past president of the New Mexico Medical Society, told lawmakers. “Having a stable medical malpractice environment makes New Mexico a better place to live and practice medicine.”

But the Senate proposal has faced criticism over whether it would adequately protect patients.

The increased cap is nowhere near as high as it should be to match inflation, and the bill would establish unnecessary barriers to families who sue after the loss of a loved one, opponents say. They say medical malpractice claims are already expensive and difficult to prove.

Spitzer, who lost a daughter in 2014, said the Senate legislation would make a broken system worse.

“I never want this to happen to another family,” he said. 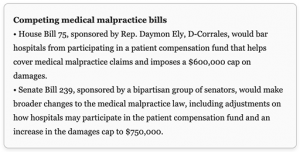 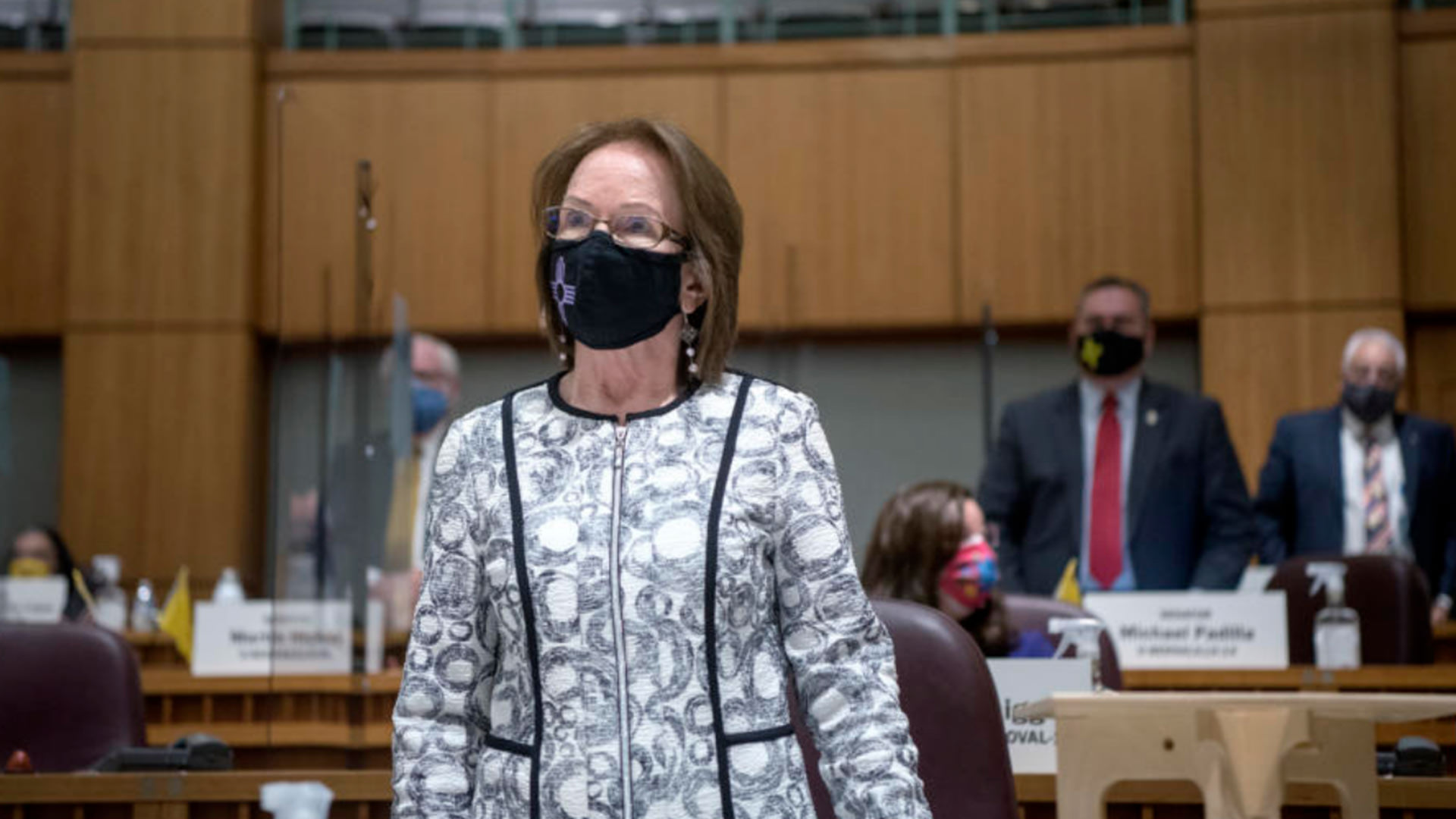 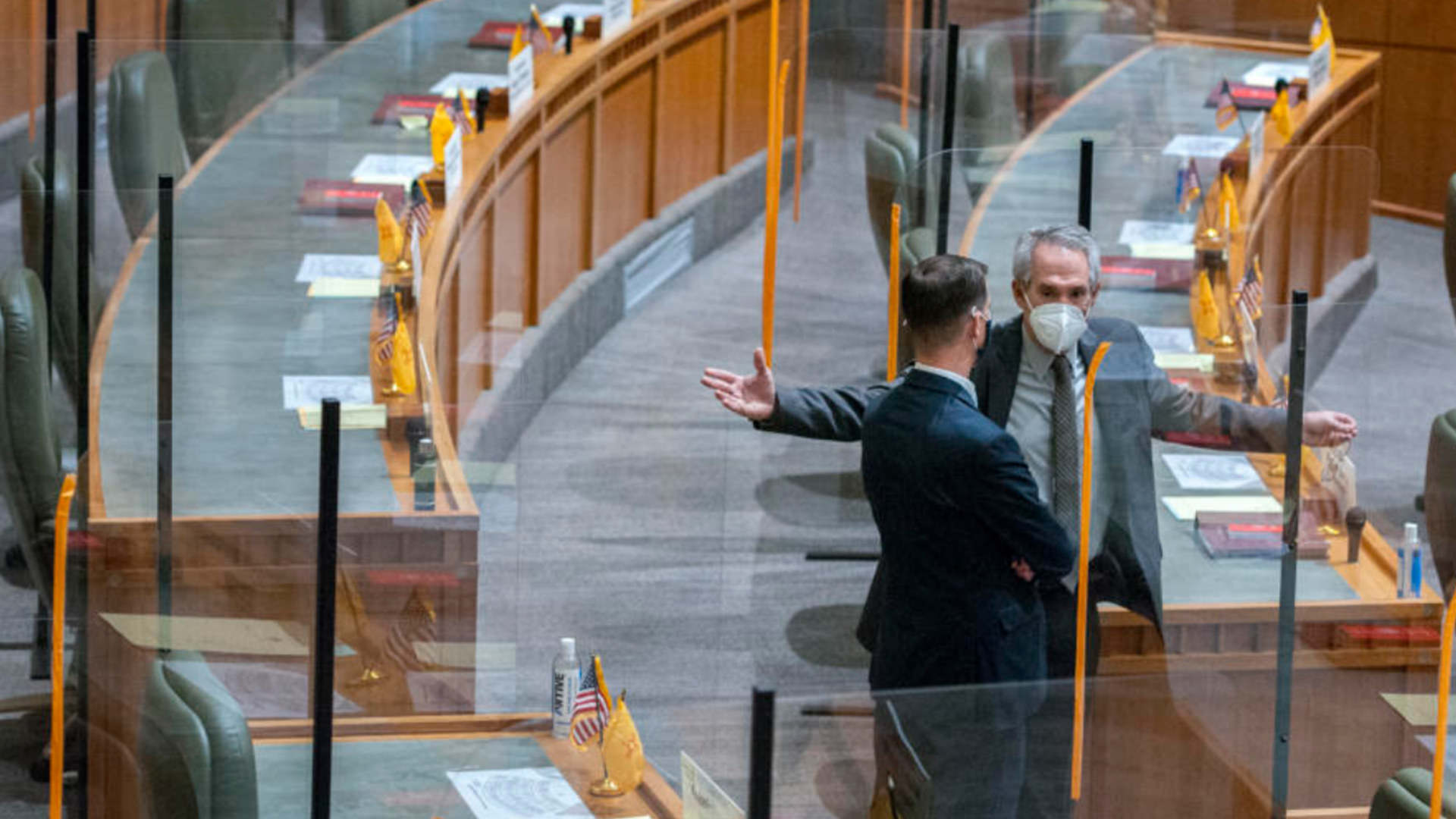 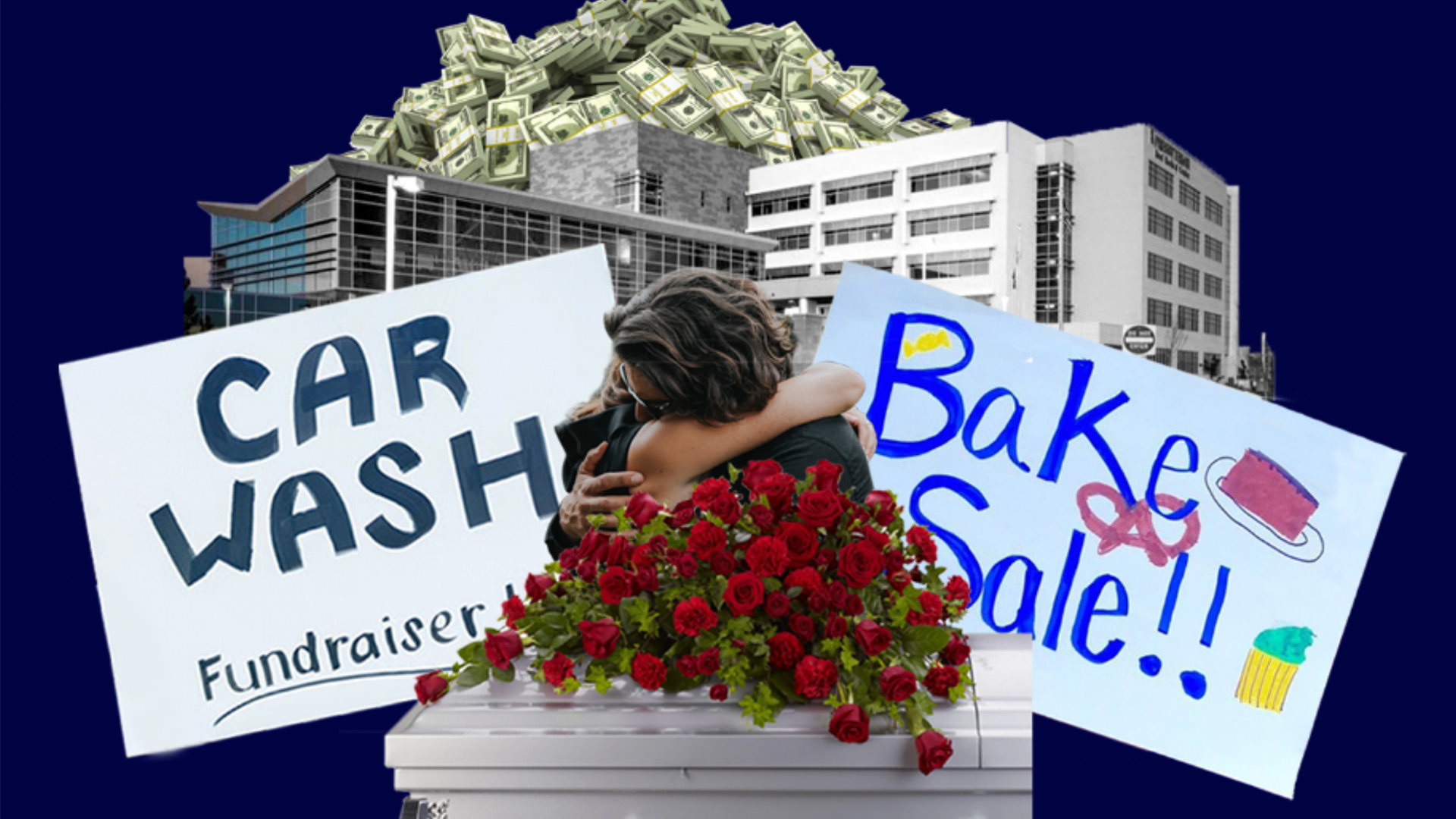